Measuring Your Website Traffic: Does the Alexa Ranking Really Work?

In a previous life, I was the “European Head of Telesales” for a large payment company and managed a team of 70+ salespeople. During this time, I gained invaluable insights on the payment industry and saw how incredibly competitive it is. Everyone is scrambling to try and capture the big online merchants, but the trickiest part is finding and scoring the sales lead.

So when a salesperson does land a huge $10M+ merchant, it’s great to see the sales floor erupt with joy. Likewise, the team will want to jump back on their desk asap and search the internet to find a great lead to match or exceed that $10M win. But how do you know when you’ve found the ‘big’ merchant? A great looking website may catch your eye but as the old saying goes, looks can be deceiving. Great imagery on a site doesn’t necessarily mean big revenue and big profits. So how do salespeople land the big fish, while leaving the rest to swim in the sea of mediocrity? After all, the eCommerce global market has a long tail of small shops vs the nice big one we all want.

Alexa is known traditionally as being one of the most commonly used traffic ranking tools by salespeople, and regarded by many as the ‘yardstick’ for judging a site’s popularity. However, not everyone is in agreement with this claim. The credibility of its ranking system has been contested by some, with discussions dating as far back as 2011 that question its authority. I feel that this is partly due the ease of manipulating the ranking of sites, by using what’s known as a booster. Simply put, regulated visits to a website can be spread over a longer period, thus inflating the results and making the rank increase appear realistic – especially to Alexa. These boosters can be free programs, either web-based or standalone software, and they all use the same basic format.

So how does this process work? Well to start off, thousands of proxies are created (a proxy is any IP address that is unsecured, with an open port that allows anyone access – invited or not). The URL of the lucky website to receive its visit is then added, as well as the desired number of ‘hits-per-hour’, or even the maximum hits allowed. Some of the more complex booster programs have functions for altering keywords, referrers, and user-agents. But ultimately, they all do the same thing – generate proxies and fire fake hits to a website address that you have specified, creating the illusion that all the visits are unique. Crafty devils!

Due to the simplicity of ‘influencing’ Alexa rankings, why should you solely rely on it to determine the popularity of a website? It often fails to rank leads that have huge social followers. Take Vince Camuto for example: this website has over 1.5M Facebook followers, with 16.5k and 6.5K on Twitter and Pinterest respectively. Despite this, Alexa gives it a page rank of only 2,239,448…even though the website is likely doing $20M+ turnover a year. A lot of sales people only look at the websites that have an Alexa ranking of less than 100K, so it appears that they are missing out on some decent size merchants here! ‘Minor’ inconsistencies aside, there remains some Alexa advocates willing it to maintain its reigning glory in the ranking rankings.

I feel that current lead scoring tools are good, but in need of improvement. This has inspired me to create a new website scoring algorithm – SalesOptimize. This algorithm takes into account a number of other site variables, including: age of a website, technology platform, social media followers/likes, and Google page rank. The scoring system can also estimate the merchant size:

Our system has identified over 72% of the big eCommerce merchants that aren’t even on Alexa’s top 100K list. It’s also incredibly easy to use, and we give you 10 free leads to start off with. You’ll need to register your details, but we don’t ask for your credit card…how could anyone say no to that?

With our system, you know you’ll be fishing with some serious deep web analytics…instead of being ankle deep in a rock pool, looking for tiddlers! 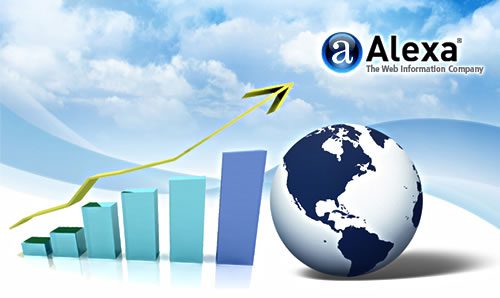 How & Why to Improve Your Alexa Ranking